According to the United Nations, “Every year, more people die from unsafe water than from all forms of violence, including war.”  What make water unsafe? Is it treatable? Can it be prevented?

Tap water (sink water, municipal water, city water etc.), water supplied to a tap or faucet is used for a wide range of things. It can be used for washing, cooking, drinking etc. As a matter of fact, water solely for consumption is one of the basic importance of having water in the first place.

For this reason health experts and authorities advise that you should take at least 2 liters of water per day. Drinking clean and clear water is healthy for good growth and development. However, drinking unclean, unsafe and contaminated water can lead to a lot of health issues, including the more threatening ones. These water bodies could be surface or ground water.

Tap water gets contaminated by a lot of pollutants. It could be sewage, inadequately managed industrial wastes, wastewater etc. They pose serious health risks. 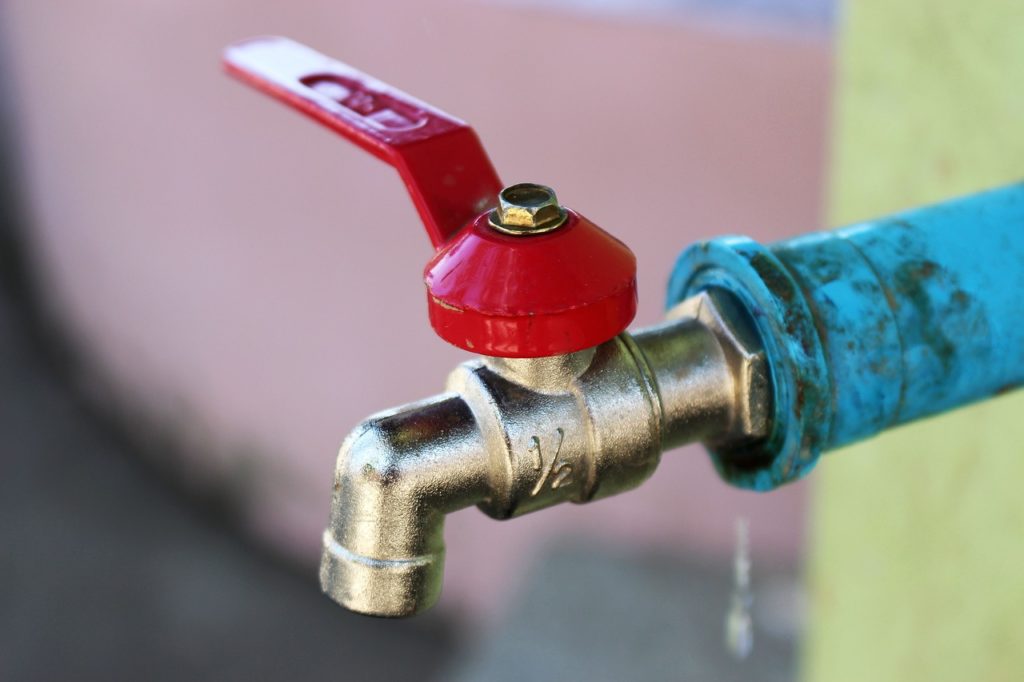 However, the common cause of metallic tastes in tap water results from the altered pH rate in consumable water. This is as a result of corrosion of water pipes, contamination by excess chemicals and if you’re utilizing a borehole, poorly managed wastes as mentioned earlier. In other words, it’s either you have a decaying pipe system or you manage toxic wastes poorly, typically close to your water source. Lets get into further detail on the causes and how you can prevent or treat them down the article.

When you start suspecting your tap water tastes different or tastes like metal, it could be a sign the water running to your taps, showers, toilets contain traces of metals and needs to be checked and treated quickly.

What Causes The Metallic Taste In My Drinking Water?

When traces of metallic elements for example, copper, zinc, or lead find or leach their way into your water, your water will taste metallic.

This horrible problem can happen in various ways. Some are caused by industries and others could be you or where you live. Below are some reasons why your water will taste metallic:

NOTE: Another sign of contaminated water that is a red flag is when you find surprising stains out of nowhere stuck to your clothes or laundry. This happens because there is a high concentration of iron in your tap water. Yellow, red, and brown spots stick to your clothes due to high levels of iron. If you own white shirts, after washing them they will turn dull and drab.

Metals in water are very harmful to human health. They pose serious health threats that can sometimes lead to possible death. When your body tissues absorbs more metallic substance through contaminated water than it should, it leads to metallic poisoning.

A study by the WHO (World Health Organization) confirmed that an estimated 3.75 million people of the world’s population die every year from unsafe water and that includes tap water that contains metallic chemical elements. On the average that is a staggering figure of over 10,000 deaths piling up in morgues daily.

Mercury, lead, cadmium, arsenic, zinc, copper, magnesium are some of the most common metals absorbed by the body.

We have stated below some health risks of some metals in tap water and their symptoms.

If traces of lead are present in your tap water, it is followed by these signs:

Constipation; sleep problems; irritability; your blood pressure could spike; you will lose appetite often; anemia; disturbing headaches; fatigue; memory loss; and if you have kids, it could kill their developmental skills.

If arsenic is present in large quantities in your body it is followed by the following symptoms:

You will begin to grow spots on your skin such as warts; occasional muscle cramps; nausea, diarrhea, and vomiting. In another instance, you could experience irregular heartbeats.

Too much cadmium in your body tissues results in: fever, breathing problems, and muscle pains.

Traces of mercury in your body can lead to: shaky legs; difficulties in speaking and hearing; troubling eyesight; nerves in hands and face are soon damaged; muscles turn weak.

Although metals like iron, zinc, and manganese, which occur naturally, give off a metallic taste and sometimes discolor your water-in the case of iron-traces of them in the body are not known to pose serious health risk that could lead to death or paralysis of your body’s motor functions.

Metals That Affect Tap Water & How To Detect Them

Most metallic elements occur naturally. Still, they can also be found in nitrates in agriculture and even in our sewage. Because they enter our water undetected, it is usually hard to tell which is present in our tap water. You can neither smell nor see them. Tasting them alone is not enough to give off which metal is responsible for that taste.

For this reason, we have a curated list below that gives hint on which metal to suspect when your tap water has been contaminated.

Manganese is a naturally occurring metal. Manganese is commonly used in steel and corrosion-resistant aluminum alloys. It is found in tobacco, battery, fireworks, used as an organic reagent in Chemistry. Although Manganese is an essential element require by your body, only fewer amounts are needed. Manganese should not be more than 50 parts per million (50 ppm) in your drinking water according to the United States Environmental Protection Agency. When Manganese is in excess amount in your tap water it will taste metallic, look brownish-red, and sometimes black slime.

Lead is a bluish-silver that occurs naturally. Lead is extremely toxic to almost all life forms, including humans, plants and animals. Lead can enter you tap water through corroded plumbing systems, leaks from industrial activities, and natural deposits that seep into your water source. Lead is considered to be very unsafe. No amount of lead is safe in tap water. Lead can neither be seen, is tasteless and cannot be perceived. Usually the age of your home, fixtures and pipes determines the lead level in your home.

Arsenic is toxic to humans. Natural erosion from soils and rocks is the common way traces of arsenic enter your tap water. Whether arsenic is safe in drinking water remains an argument between health and water experts. EPA recommends an MCL (Maximum Contaminant Level) for arsenic of no more than 10 PPB, but at that figure it poses potential health risk especially in children.

Copper rarely occurs naturally. The main source of copper elements is in corroded pipes, fixtures and taps in homes. Copper is safe for health has long as it does not exceed 1.3 ppm, according EPA. This means, traces should be very, very small.

Excessive copper intake has been linked to vomiting, nausea, kidney and liver failure. Copper traces in your drinking water will leave the water tasting kind of bitter. If your fixtures have a blue-green stain on them, that’s a sign your water has copper elements in it.

Aluminium can seep into your water in various forms. Natural formation underground, additives, refining and mining operations are some of the various ways Aluminium can enter your tap water.

High aluminium content in water will leave the water colored, although this is generally not the case.

Nickel occurs naturally. However, it can be leaked into your water through mining activities. How safe nickel is for drinking is still a talk that is hanging. But when present in low amounts, it can lead to decreased lung functions. On the other hand, if they are large amounts present in your drinking water they can cause the formation of cancer cells in the body.

What To Do If Water Has Metallic Taste

While some metals like copper, magnesium are tolerable when found in your drinking water, others like lead, nickel, mercury have devastating effects when consumed. Knowing the right steps to take when your water is contaminated and starts tasting bitter, sour and like metal is important. You will not only save yourself from taking a nasty and deadly blow but your entire household too.

How To Prevent Metallic Water

The seepage of heavy metals in water can be prevented through the following ways:

Metals for example copper, iron that are prone to rust or gain access into water bodies or main lines through rust, adding an extra layer of coating that is protective will prevent such instances from occurring.

This involves the dipping of fixtures that are prone to rust into an acid solution. This in turn forms chromium oxide on the surface of the material which creates a passive film on the surface of the corrosion-prone fixture. This protect the rust-prone fixture from reacting with oxygen in the atmosphere. It is widely used in water treatment and in mining and refining industries.

This is the process of coating iron or steel fixtures or pipes or faucets with protective zinc to kill any growth of rust. In addition, Zinc adds as a sheet of protective layer on fixtures which is insoluble in water preventing oxidation from occurring and eventually leading to rust.

How To Treat Or Extract Heavy Metals From Tap Water

Treating metal is tap water is very important and should not be ignored. The following ways are some great metallic treatment techniques.

Since metals are heavily present in old pipes which are often rusted, it is very important you have them changed quickly to stop getting the sour taste or reddish colour on your skin.

Boiling water has been one of the oldest filtration techniques known to man. However, it won’t work when your water contains huge dosage of metallic elements. If you boil or use a water heater to heat your water that has metals inside, it will only increase the level of concentration of metal elements in your tap water. Furthermore, pregnant women, infants should steer clear of tap water that have traces of metallic contents. They are in far greater risk than others who are neither pregnant nor considered as youngsters.

This method is considered to be the best if you are keen on killing any trace of metals in your tap water. They are various filtration systems available. Some of them are:

Sewer Waste Should Be Treated Properly Before Disposal

Industrial wastes and sewer waste should be properly treated before being dropped in water bodies or dispose on standing surfaces.

The presence of heavy metals in water is alarming and should be taken seriously. Adequate solutions and preventive measures should be taken to reduce your water exposure to this metallic elements. Our prevention tips and treatments are a perfect guide for you. They are recommended practices by experts. They are safe and effective techniques.

Finally, on whether tap water is less healthy than bottled water, it depends on their source. Usually this is based on preference. Drinking tap water is still recommended worldwide. Unless metallic contents present in tap water are high, it should be dropped and replaced with bottled water.