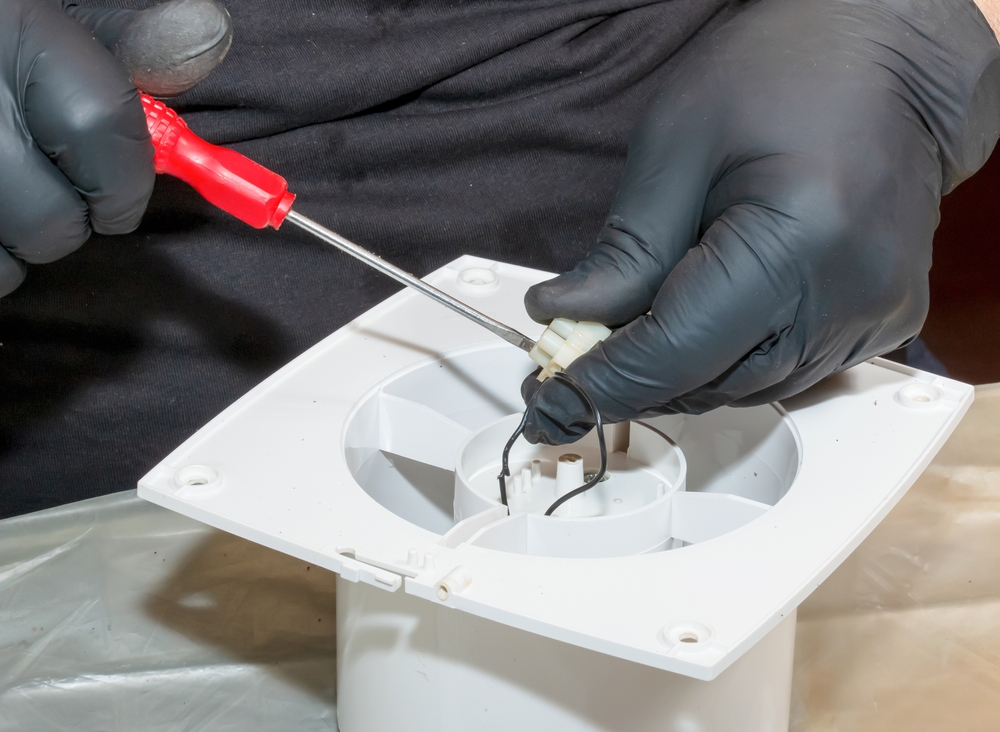 If your kitchen exhaust fan isn’t pulling air, you’ll need to troubleshoot to identify the problem’s source and address it accordingly.

Why Is My Kitchen Exhaust Fan Not Working?

Kitchen exhaust fans, also called range hoods, usually stop working for one of two reasons: the fan has lost connection to power, or its motor has burned out.

Wiring failure or a faulty user interface or electronic control board could also be to blame.

How To Troubleshoot An Exhaust Fan

When your kitchen exhaust fan isn’t pulling air, you’ll need to troubleshoot it to identify the source of the problem. Follow the easy steps below to solve the issue.

1. Check For Loss Of Power

Your kitchen exhaust fan is either plugged into the wall or wired to your house’s power supply. If the fan isn’t working, the first step is to ensure it’s receiving power.

Disconnection from the power source is often the reason your kitchen exhaust fan isn’t working.

Check that the range hood is plugged in and that the on/off switch is in the on position. Use a multimeter to make sure the switch is working. If not, replace the switch.

Next, take a look at your fuse box to see whether a fuse has blown. If the glass fuse container has metallic residue or is gray or cloudy black, it has blown and must be replaced.

2. Look For A Burned-Out Fan Motor

If a disconnection from power isn’t the source of the problem, then a burned-out fan motor is most likely the issue. You can use a multimeter to see whether the motor is faulty.

When a fan motor starts to burn out, it becomes noisier, and its blades don’t spin as quickly.

Once a fan motor has burned out and no longer works at all, the best solution is to replace it with a new one.

3. See If Filters Are Clogged

Whether your range hood exhausts air outdoors or recirculates the air to the kitchen, clogged filters can keep the fan from working.

Look at the grease filters first. If they’re dirty, wash or replace them.

Next, check out the charcoal filter if your kitchen exhaust fan has one. Refer to the guidelines in your owner’s manual to see if it needs to be replaced.

If there’s a vent duct cap attached to the outside of your home, check its air damper. Its job is to prevent outside air from coming indoors when you’re not running your kitchen exhaust fan.

If the air damper doesn’t open properly to let the exhaust airflow outside, you’ll need to repair or replace it.

You’ll also need to look at the damper located above the fan in the range hood. Just like the outdoor damper, this part of the exhaust fan needs to open properly so that air can flow out of it.

Be sure to remove power from the kitchen exhaust fan to complete this step safely. Look at the fan’s blades to see if they’re damaged. If you find a damaged blade, replace it.

Unplug the range hood or otherwise disconnect it from power before checking the wiring. Look at the connections between the kitchen exhaust fan motor and the switch.

If you find any loose wires, reconnect them. Any damaged wires should be repaired or replaced.

7. Look For A Faulty User Interface Or Electronic Control Board

Your kitchen exhaust fan should still be disconnected from power for this step. Look at the electronic control board to see if there are any burn marks.

If there are, this shows that there has been a control board failure. Any burn marks on the circuit board indicate that the control board must be replaced.

Your range hood might have a user interface control that starts the fan. This is a display panel and keypad that sends signals through a ribbon wire cable to the electronic control board.

If this is the case for your range hood, you might need to replace the user interface if it isn’t signaling to the control board properly.

If you’ve replaced the control board, but the fan still isn’t pulling air, replacing the user interface control is the next step.

If you’ve gone through each of the troubleshooting steps above but haven’t had any luck, it’s time to contact a professional. An appliance repairman, appliance installer, or HVAC contractor should be able to identify and resolve the problem.

You just finished washing the dishes and turned on the disposal, only for it to start smoking! While your first thought might be that your garbage disposal is on fire, that’s actually very...