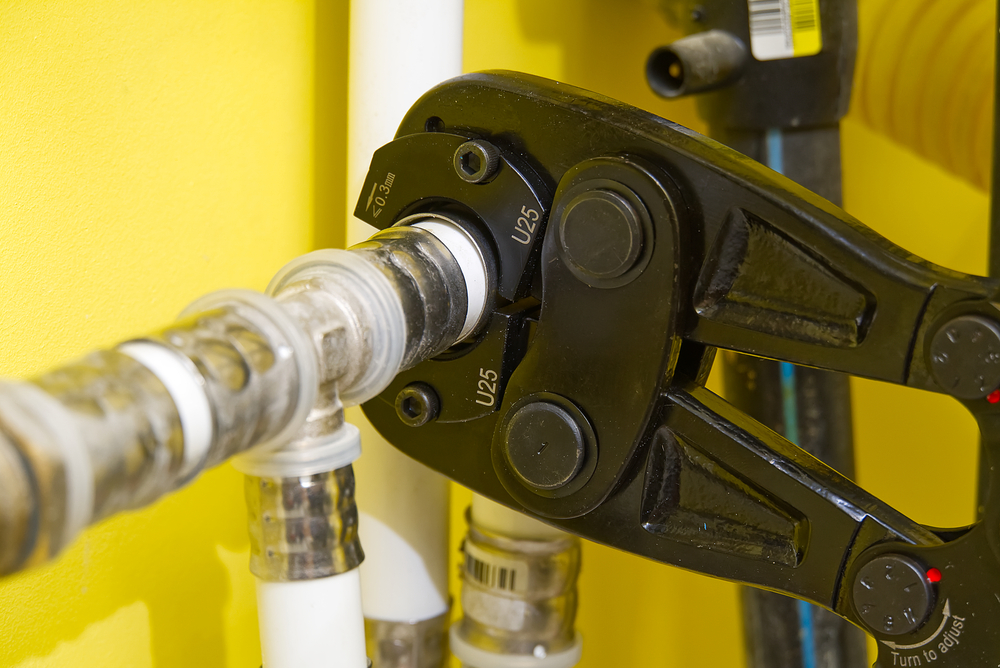 If you’re a PEX newbie, you may be wondering whether it’s better to crimp or clamp your PEX seals. Crimping and clamping have a lot in common, but they also have a few differences that can help you choose one over the other.

Crimping and clamping are both methods of creating reliable, leak-proof PEX seals, but each has its pros and cons. PEX crimp tools have a handy Go/No-Go gauge that verifies successful seals, and they’re the more popular choice. Meanwhile, PEX clamp tools are easier to use in small spaces and tend to be more cost-effective.

Generally, choosing between crimping and clamping is a matter of personal preference. Read on to learn more about each PEX sealing method as well as its advantages and drawbacks.

The table below shows a comparison between PEX crimps and clamps:

Nowadays, fittings have been improved, and PEX is more popular than ever. In fact, it’s used for more than 60% of water supply systems in new residential construction projects.

Crimping and clamping are two different ways of sealing PEX connections. Each of them is briefly explained below.

Crimping uses copper rings with teeth to seal PEX connections. The crimping process involves squeezing the copper ring around the PEX piping. This creates a firm, reliable, and accurate seal.

PEX crimp tools have been around longer than PEX clamp tools. They tend to be more popular and highly trusted.

Clamping, while similar to crimping, is not exactly the same. This method uses a stainless steel ring to seal the pipe and fitting. PEX clamps only need to be tightened in one area, rather than the entire metal ring.

Even though clamping isn’t as popular as crimping, it still creates reliable and accurate seals.

Which Is Better, PEX Clamp Or PEX Crimp?

Now that we’ve covered the basics of clamping and crimping, let’s get into a more detailed comparison.

What They Have In Common

PEX clamp and crimp connections are similar in several ways.

Both types of connections use the same PEX fittings. These are usually called “barbed” or “crimp” PEX fittings.

The processes of clamping and crimping are so similar that many people can’t immediately see the difference. However, each approach does require a different type of ring and tool.

Crimping and clamping both create highly reliable seals. When executed properly, neither will leak, and neither is better than the other.

Below, find some of the reasons you might want to choose a PEX clamp tool over a PEX crimp tool.

One benefit of PEX clamps is that they’re usually easier to remove. If you make a mistake or need to remove the clamp for any other reason, it’s not too challenging to do so.

Requires Only One Tool

To make a PEX connection with a clamp tool, you only have to compress the clamp mechanism itself. This means that you can use the same clamp tool with all PEX sizes. Because of this, clamping can be more convenient.

As mentioned above, you only need one tool for clamping. This tool tends to be less expensive than a single-size crimp tool, and this single tool works for multiple projects. Therefore, clamping is more cost-effective than crimping.

Resistant To Rust And Corrosion

Because clamping typically uses stainless steel rings rather than copper rings, clamped connections are more resistant to rust and corrosion. This is particularly beneficial for direct burial projects like running a water line to a house.

Easier To Use In Small Spaces

Clamping is often preferred when working in confined spaces. This is because you only have to compress the clamp mechanism rather than wrap the tool around the entire tube.

Clamping requires less pressure and force than crimping. If you’re in a small area where it’s difficult to exert force, clamping makes it easier to create a reliable connection.

Crimp tools are only compatible with copper rings, but you can use clamp tools with both copper and steel rings. The clamp tool’s ability to work with both materials makes it more flexible. Still, it’s important to note that stainless steel rings are preferred.

Now, we’ll cover the upsides of choosing a PEX crimp tool instead of a PEX clamp tool.

Crimped PEX seals have been around longer and are more universally trusted. Many plumbers appreciate the security of crimp connections because they involve tightening the ring around the entire body of the pipe.

One of the biggest advantages of the crimp tool is that it has a Go/No-Go gauge. This gauge makes it easy to confirm that a connection is successful, even years after the original connection was made.

The Go/No-Go gauge is especially handy when making watertight connections. It ensures that your connection is correctly sealed and completely leak-proof.

You can confirm clamp connections based on the way the ratchet tool releases. However, PEX clamp tools don’t have the Go/No-Go gauge.

In most cases, it’s easier to find crimping components than clamping components. You’ll need different crimp tools to fit various copper ring sizes, but you can purchase a set with several interchangeable jaws.

You don’t need any special skills to create a successful connection with a PEX crimp tool. Even those who are completely new to PEX connections can easily make a watertight seal. PEX clamp tools, on the other hand, require more expertise.

It’s difficult to choose one method of sealing PEX connections over the other because both are highly reliable.

However, if you’re working in small spaces or have a limited budget, a PEX clamp tool may be the right choice for you. If you’re focused on ensuring leak-proof seals, you’ll likely prefer the PEX crimp tool with its Go/No-Go gauge.