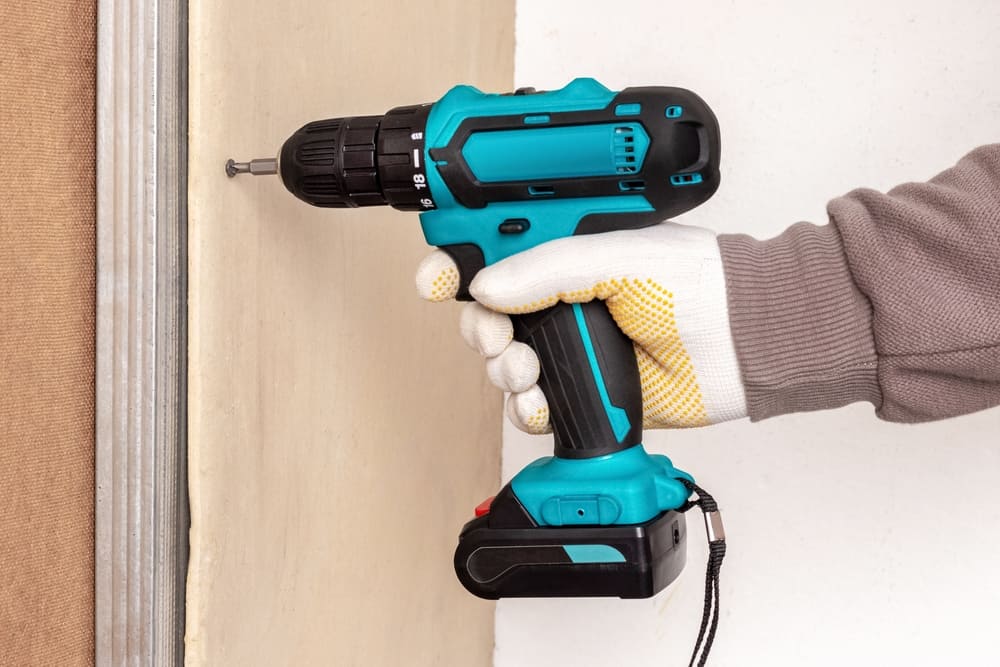 Drywall installation can be done with screws or nails designed for use with this background. However, you must consider the types, cost, and installation factors when deciding which to use.

Overall, drywall screws are stronger, suitable to install in wood and metal, and have a better grip. Drywall screws are ideal for ceiling installations, offering superb holding power. Drywall nails can only be used in wood studs. Use the proper screw or nail length for a proper grip and follow your local building codes regarding placement and amount needed.

The table below shows a comparison between drywall nails vs. screws:

Drywall nails and screws are made of sturdy steel and come in a variety of types for various project needs.

When purchasing drywall fasteners, the packaging must indicate that they are designed for use with drywall. You cannot simply purchase any nail or screw.

Drywall anchors are an additional tool used for hanging heavy items on the drywall. Nails come with a toggle design that opens up behind the wall, and screws will have a plastic sleeve that surrounds the screw upon installation, increasing grip strength.

Drywall nails are designed to have a stronger holding power with a ringed, barbed, or cement-coated shank.

Cupped-head nails also feature a rounded head, which allows the nail to countersink into the drywall to create a smooth finish with compound or tape.

A screw has a twisted shank that delivers incredible holding power to the material it is nestled in. They typically have a Phillip’s head.

There are four types of screws suitable to use with drywall:

When choosing a size, make sure your nail or screw is not too short or it might not grip properly on the stud. However, the screws or nails should only penetrate the stud rather than go all of the way through for strong holding power.

The thickness of the drywall material will determine the length that you need to use.

Drywall nails are very hard to break or bend in half and can withstand sideways pressure. As previously mentioned they are coated or textured with rings or barbs for holding power.

Drywall screws have a twisted shank that creates a firm grip as it is twisted into the material.

Screws are strong if there is no external pressure or movement that could snap them in half. This is unlikely to happen in a stable stud since these do not move.

On average, drywall nails are two dollars cheaper per pound than drywall screws, if you compare the same brand and length.

Screws cost more due to a more complex manufacturing process. This difference can add up quickly for large drywall projects.

Local building codes govern screw and nail placements, which could vary in the amounts that you need to use in placement on the studs and sides.

For example, for a 48-inch perpendicularly hung drywall sheet, drywall screws are installed every 12 inches, with five screws in each stud.

Drywall nails of the same size would require installing every seven inches, with eight nails in each stud.

Alternatively, nails can be paired every 12 inches for a cleaner appearance and finishing purposes. However, you will still end up using more nails than screws.

Both screws and nails are installed around the outer edge along the seams as well.

Installers often use double-nailing with nails to reduce the chance of them popping from the surface as the house settles. This technique will affect the overall cost if used.

Determine how much you need for screws and nails to figure out the total cost. This will help you find the cheaper option.

A hammer will be much cheaper than a screw drill.

However, you should choose between screws and nails based on your application and circumstances, not the cost of the tool. No matter what tool you end up buying, rest assured you’ll use it for other home improvement projects, too.4. Installation

Both nails and screws can be used to install drywall in the living areas and the bathroom. However, opt for screws in ceiling pieces to avoid the pull of gravity on nails.

Gravity and house settling may work against nails over time, resulting in visible bumps where the nails are inserted.

Nails will also move or pop in response to extreme hot or cold temperatures.

Nails bumps can be remedied with joint tape or compound over the head. Some nail designs can allow them to be sunk deeper into the drywall.

Installers will also double-nail panels to reduce the pressure on the points and thus reduce the risk of popping nails. But there is still some risk of movement as the house settles over time.

This video discusses why nails come out of drywall:

A hammer is used to install drywall nails in wood studs only and can be done rather quickly. It has a rounded head to push the nail in slightly.

It is not recommended to use a nail gun to install drywall nails. The force could cause damage to the point of contact, such as tearing the outer paper layer of the drywall with too much force or missing the nail and hitting the drywall.

Screws can be used with wood or metal. They are installed with a drilled pilot hole (or self-drilling with wood) in conjunction with a screwdriver. This can make the installation process longer.

Alternatively, drywall screws can be installed with a screw drill, which is much like a drill but is designed for use with screws.

A screw gun can allow the installer to put in drywall at a faster rate. It offers targeted pressure to install the screw without damaging the outer layer of the drywall.

Screws can be forced in with the screwdriver or screw drill, making a slight indentation.

When finishing the drywall installation on ceilings and walls, both screws and nails are covered with compound or joint tape.

Nails are harder to remove once pushed into the surface. Larger sections of drywall may need to be removed to fix an area.

Screws are much easier to twist back out for repair work.

Drywall screws offer a better and more secure holding power than nails. They may cost more but are easier to remove and less likely to pop out from the wall or ceiling over time.

Drywall screws work with both metal and wood studs.

It is okay to use drywall nails, but they should not be used on ceiling installations.

In the long run, drywall screws used with a screw drill are worth the investment for longevity and performance.