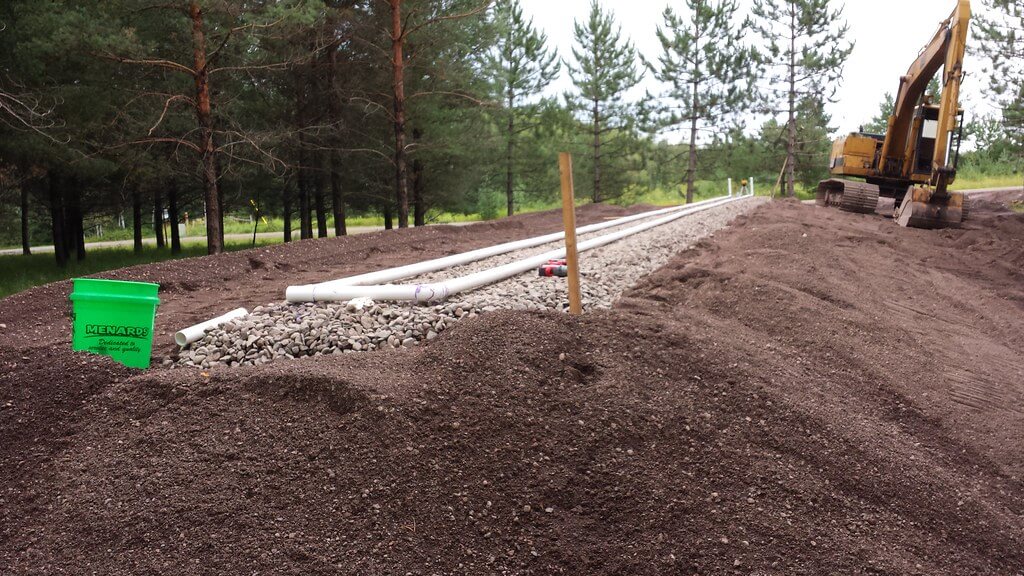 If you live in an area with a high water table or have local sources of groundwater, a traditional septic tank with a leach field might not work.

The mount septic system is the primary alternative when this is the case. However, there are plenty of reasons you may or may not want a mound septic system.

For example, with high upfront installation costs, you’ll spend a great deal on the system. Other problems with mound systems include that they always require regular maintenance.

On the other hand, they allow you to use your own septic system, even if it is too far away from the city sewer to utilize it.

What Is A Mound Septic System?

Mound septic systems allow you to install a drain or leech field in areas with a high water table, groundwater, shallow soil, or high bedrock.

Essentially, if you can’t dig far enough to allow effluent or wastewater to safely filter back into the ground, a mound system is your friend.

Here, instead of excavating the drain field, you build the drain field up. In most cases, it’s constructed of a mound of sand. Requirements vary from area to area.

However, you always need at least 48 inches between the top of the mound and the zone you don’t want to contaminate. That could be bedrock, a firm layer of clay, or a water table.

This allows the leech field to filter water through several layers of sand before it hits the native soil or the water table.

This effluent is pumped out of your traditional septic tank in controlled amounts. This allows it to trickle water into the mound over time, so that it can effectively filter.

This pump and elevated leach field system means your septic system will be higher maintenance than a traditional system. However, it will allow you to install a septic system almost anywhere.

Of course, you’ll still need a permit. In addition, most mound systems come with significant requirements for maintenance.

Still, if your option is to have a septic tank and system or not, having it is often the preferred choice. Mound systems make that possible.

There are plenty of reasons you might want to use a mound septic system.

Of course, most people only install them if they have to.

Here, you build up a filtration layer of sand. This allows the effluent to filter through and release potentially harmful bacteria and contaminants.

Here, it’s crucial that your septic system is built to standards and that you maintain it to prevent sewage from washing away.

However, if you do, you can pump wastewater into a drain field, where it will filter through the sand before hitting native soil, so you minimize how much you contaminate the surrounding area.

Not Limited By Soil Type

Many types of sewage systems are very limited by soil type.

For example, if your local soil is primarily sand, clay, or silt, you can’t have a standard drain field. Instead, you’ll have to excavate and infill the area with more suitable soil.

That can be extremely costly, and sometimes more so than installing a mound system. However, mound systems aren’t impacted by local soil. Instead, you’ll simply build on top of what’s there.

The only thing you care about is how deep the native soil is to whatever layer you don’t want to contaminate – for example, clay, bedrock, or the water table.

That will mean you don’t have to worry about percolation tests. However, it doesn’t mean that your installation will be cheaper.

For example, you’ll still have to have your sand tested and graded to ensure it meets specifications set forth by the EPA.

If you don’t have a mound system, you’ll either have to install a costly mechanical filtration system or constantly pay to have your septic tank pumped and emptied.

Or, of course, you could potentially pay to have your septic system connected to the city sewers, but if that were an option, you’d likely already be going for it.

If properly installed, your mound septic system will never smell. In fact, if it does, you have a problem, and your system isn’t properly trickling downwards.

This isn’t so much a pro as a basic function of any normally-working septic system. However, a lot of people are concerned that mound systems will smell. If installed properly, they will not.

The largest con of mound septic systems is that they are costly to install.

However, there are some other reasons you might not want to install one.

This is necessary because mounds are elevated. Any significant flow of water would cause soil or sand erosion.

So, you have to trickle water out into the mound at a rate that does not erode the system. This means that your system cannot take sudden increases in water use.

If you choose a mound system for an average of four people, adding four more could cause problems over a few weeks.

Of course, problems will only arise when your septic tank is full. So, you can alleviate some of these issues by choosing a larger tank. However, you’ll never be able to increase the volume of wastewater.

Mound septic systems require significant and frequent maintenance. Here, the most important part of that maintenance is the pump.

Effluent pumps normally last between 5-15 years. However, you’ll have to clean filters, replace and repair sensors, and pay for periodic checks.

In addition, you’ll have to periodically have the mound repaired or rebuilt. If properly cared for, this won’t ever happen.

However, if your area floods, if someone drives over the mound, or if damage happens for another reason, you may have to have eroded soil replaced. That can be costly.

How Often Mound Systems Are Pumped

In addition, mound systems must be pumped regularly. In most systems, that’s designed to be done on a yearly basis.

If you have to have it emptied more often, the system is not large enough for your home. If you don’t have the tank emptied, the solids could overflow and clog the drain field.

Why do mound systems not break down as regular septic tanks do? They can. However, the pumping and frequent water movement often disturb bacteria levels, meaning breakdown is less efficient.

Mound systems are one of the largest and most noticeable septic systems you can have.

For a 3-bedroom house, a mound system might be as long as 200 feet. Most will average around 34 x 95 for the same space. In addition, they have to graduate downwards.

If your mound system falls off too fast, it will erode. So, you have to spread them out, with a minimum fall of about 2 feet of horizontal space for every foot of drop.

Many people find this to be unsightly. However, it can also take up most of a yard or back area. While you add topsoil and grass on top, you cannot plant trees on it. This means you’ll have limited landscaping options to hide the mound.

You’ll need at least 12” of sand, however. Depending on how high the dirt is, you’ll need up to 60 inches of sand to meet minimum requirements.

In addition, your sand has to meet specifications for mound septic systems set by your state. This means it must be tested and approved before you can use it.

In addition, you’ll need topsoil, seepage trenches, building paper, straw, and backfill soil. These can all be extremely costly.

It’s also important to note that you may have to replace your effluent pump 3 or more times during that period. However, with good maintenance, your pump may last the entire duration of the system.

After 15-25 years, you’ll normally have to have the mound excavated and replaced with a new sand mound.

Mound septic systems operate using the same basic principle as a traditional septic system but with a few differences.

The first difference is that mound systems don’t rely on hydrostatic or gravity pressure to empty effluent into the drain field. Instead, you use a pump to mechanically move wastewater, at a rate calculated for the field you’re filtering into.

The second difference is that you don’t use an excavated drainage field. Instead, your leech field is raised sometimes 60 inches or more, above the ground.

You install the drain field over the mound of sand, add a barrier on top, and then replace the topsoil.

Otherwise, there are no real differences. You do get a separate pump tank for the system. However, you’ll normally use the same type or size of the septic tank that you would for a traditional system.

Maintaining a mound system can require work. However, the following tips should get you started.

In most cases, it’s a good idea to pay for an annual inspection from a professional company at the same time as your annual tank pumping.

Mound septic tank systems have a lot of pros and cons. However, in most cases, when you install them, they’re the only option. That’s true in large portions of the United States where the groundwater is too close to the surface for a traditional septic system.

If that’s the case, you’ll likely have to install a mound system or do without a septic system at all. For most people, the latter isn’t a choice, which means you’ll go with the mound system.