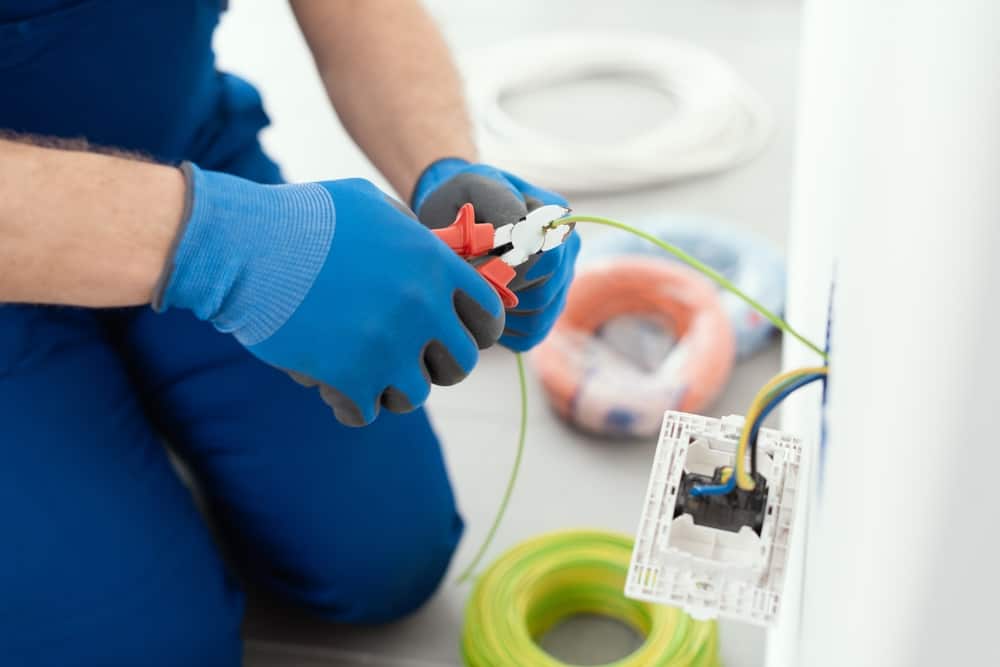 Nobody wants to deal with a garbage disposal that doesn’t turn on, and it can be especially frustrating when it seems the outlet is to blame.

When the outlet where your garbage disposal is plugged in is not working, what can you do to troubleshoot and fix the problem? Keep reading to learn about the various reasons why your garbage disposal outlet may not be working and how to address them.

We’ll also talk about explanations for your garbage disposal not getting power and how to troubleshoot them.

Why Is My Garbage Disposal Outlet Not Working? 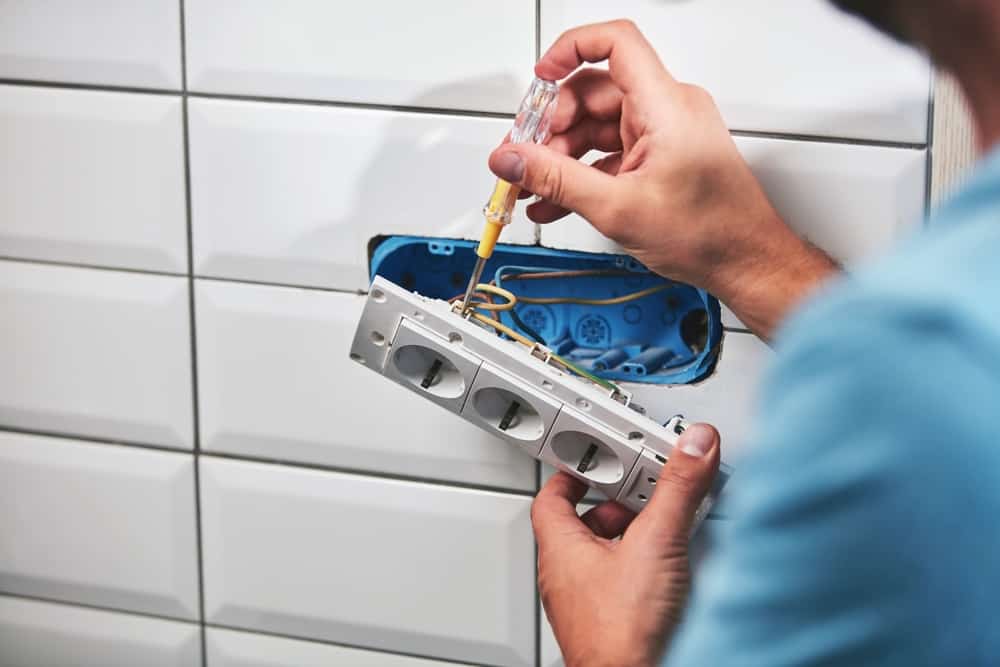 There are several reasons why the outlet for your garbage disposal may not be working.

If troubleshooting the following issues doesn’t get you anywhere, we recommend calling an electrician to check it out.

1. The Problem Is Actually Your Disposal

Before you assume that the outlet is the problem, try plugging something other than your disposal into it. A lamp or a hairdryer are good options because it’s easy to tell if they’re working once plugged in.

When you connect a different device to the outlet and it receives power, that indicates the outlet isn’t actually the problem. Instead, there might be a deeper issue with your disposal.

2. Your GFCI Outlet Needs To Be Reset

Ground fault circuit interrupters, or GFCIs, are typically installed in locations near water, so your disposal may be plugged into one.

GFCI outlets are able to sense surges in electricity, and when this happens, they automatically shut off to prevent electric shocks. However, these outlets sometimes shut off even when no surge has occurred, and then they need to be reset.

The solution here is simple: just push the red reset button in the center of the GFCI outlet. Then plug in your disposal again and see if it works.

3. Your Breaker Panel Needs To Be Inspected

In many cases, you’ll lose power to multiple outlets located close to each other. Try plugging a lamp into other outlets in the kitchen to see if they’re working.

If you notice that many of the outlets don’t seem to be connected to electricity, then you’ll need to inspect your breaker panel.

It’s possible that the breaker short-circuited. Try resetting the breaker, but if it flips again afterward, especially if you don’t have anything plugged in, it’s time to call an electrician. Short circuits can be dangerous and should be handled by a professional.

Another possibility is simply that the breaker providing power to the disposal flipped. If this is the case, the switch will be in between the on and off positions.

Flip it to the off side and then to the on side to reset the breaker, and then test your disposal outlet to see if it’s working again.

4. The Connecting Wires Are Loose

Another potential reason your garbage disposal outlet isn’t working is that loose wires caused a loss of power. You may want to have an electrician handle this, especially if you’re uncomfortable checking wiring yourself.

If you are comfortable doing so, switch the breaker off and use a screwdriver to remove the faceplate and screws from the outlet. You should be able to pull the outlet a few inches from the box.

Look to ensure the ends of the wires attached to the outlet are fastened securely to the screws. If any of them appear loose, position the wire to its corresponding screw and tighten it to hold the wire in place.

5. The Outlet Is Faulty

This isn’t as common as the other reasons listed above, but it’s possible that your outlet burned out or stopped functioning. If this is the problem behind your garbage disposal outlet not working, then replacing the outlet should resolve the issue.

Why Isn’t There Power To My Garbage Disposal? 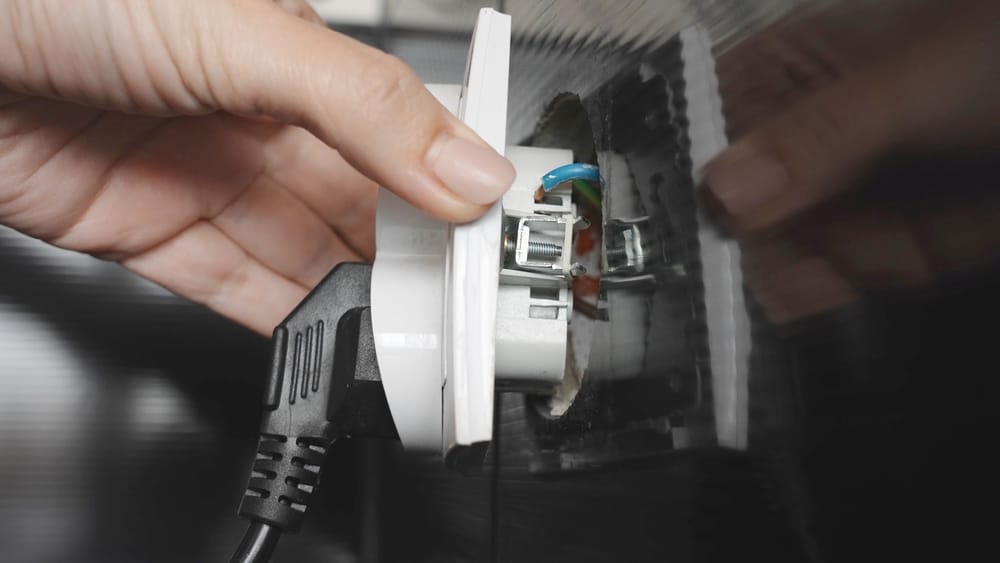 If your garbage disposal doesn’t turn on or make a humming noise when you flip the switch, then there may be an underlying electrical problem keeping the disposal system from receiving current.

6. The Disposal Isn’t Plugged In

Although it may seem obvious, you should start by ensuring that your garbage disposal is plugged in. An unplugged garbage disposal won’t receive any power and could be the root of the issue.

7. The Reset Button Was Tripped

If your garbage disposal is plugged in, locate the reset button on the bottom of the disposal and push it to reset the system. If the reset button has been tripped and is sticking out, then this should restore power to your disposal.

8. The Circuit Breaker Was Tripped

If you’ve pressed the reset button on the disposal and nothing happened, look at the circuit breaker. Reset the lever if it was tripped.

10. There’s A Problem With The Switch

It’s also possible that the on/off switch for the disposal isn’t working correctly and needs to be replaced.

A garbage disposal outlet that isn’t working may be the result of a tripped GFCI outlet or a short-circuited breaker. Loose connecting wires or a faulty outlet could also be to blame.

Sometimes, you may find that the outlet isn’t the problem at all, and that a deeper issue with the garbage disposal is the reason things aren’t functioning properly.

If your garbage disposal doesn’t appear to be receiving power, make sure that it’s plugged in, and press the reset button.