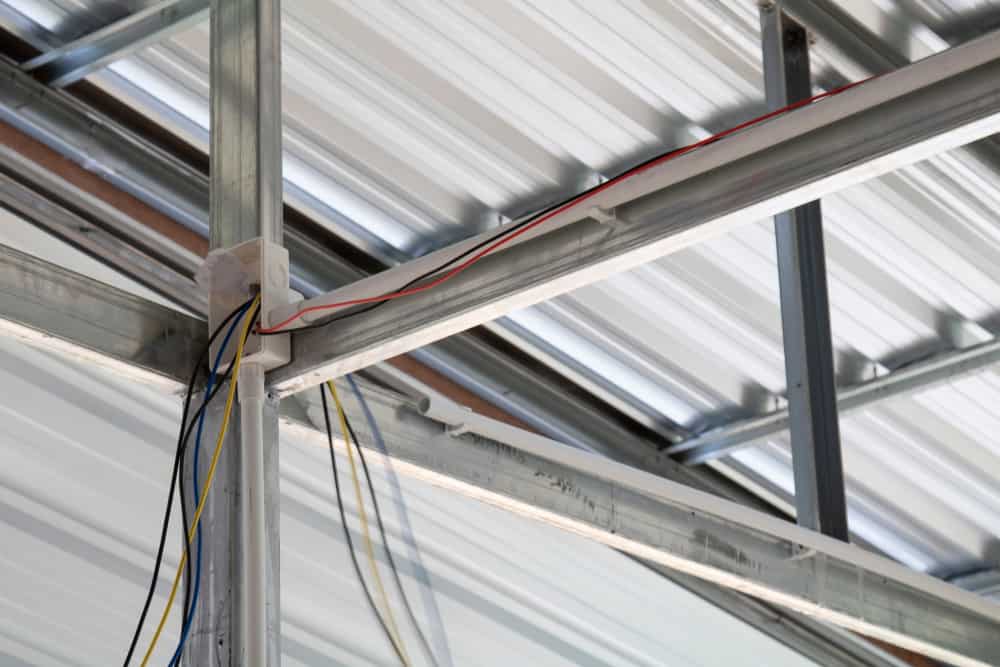 No matter why you have to run wires through the ceiling, the joists are the quickest and most natural places to do so. But can you go wrong?

Running Romex through ceiling joists is possible, as long as you follow NEC’s regulations.

Due to these requirements, you might only be able to run the cable in the direction of the joists or perpendicular to them, or you could use a running board if you have enough space.

To run Romex through ceiling joists:

Running Romex, or any other type of non-metallic sheathing cable, through ceiling joists is a straightforward project for all DIYers. Gather the supplies below before starting:

Deciding whether to run Romex parallel or perpendicular to the joists must be done with efficiency in mind.

At this stage, it helps to measure the distances and draw the blueprint to scale; in this way, you can purchase an appropriate length of cable and sufficient fasteners.

Mark the position of the joists on your blueprint and decide the shortest route from the junction box to the fixture.

Use different color pencils or markers to mark where you must drill holes in the joists, as well as the position of each fastener. According to the International Association of Certified Home Inspectors, you must install the first fastener within 12 inches from the junction box or panel.

Each additional fastener should be installed at a maximum distance of 4.5 feet from one another. However, you may want to reduce the distance between fasteners to prevent sagging. Sagging could increase the risk of accidental damage and fire hazard.

3. Decide Whether To Use A Running Board

A running board is a length of timber you can install on the joists and use as a surface for stapling or strapping the cable to it.

Installing a running board is an excellent idea if you want to prevent driving too many nails or staples in the joists. You should also install one if your planned route involves cables running perpendicular to the joists (which could mean that you have to cut notches through them).

Generally, you should install a running board regardless of the route, as long as the space in the attic or ceiling cavity allows it.

4. Prepare The Area For Installation

Now, you can grab the diagram and mark the route on the joists. If you decide to use a running plate, install it so that it allows you to follow the route marked on the diagram.

If you can’t install a running plate, mark the spots where fasteners should go in each joist.

In this case, it is ideal to plan a route that runs parallel to the joists; this would allow you to avoid cutting holes for the cables in the joists. If this is not possible, perhaps due to the position of the junction box or fixture, mark the spots where notches are needed.

Cutting notches in joists should be your last resort. Each hole you cut will make the joist weaker, regardless of how small it is.

For this reason, you should try to minimize the number of holes when planning the route.

Bore holes through the joists with a hole saw. The diameter of each hole should be large enough to let the cable pass through, and install nail plates to prevent driving nails or staples into the cable accidentally.

You can now run the cable through the joists, following the marks on the timber.

Fasten each length of cable as you go, starting with a first strap or staple within 12 inches from the junction box or panel to which the cable is attached.

Fastener-wise, you can use either straps or staples. The former requires nails you can drive in with a hammer. The latter requires the use of a stapler. Both types of fasteners are easy to install, as well as easy to remove if needed.

Can You Run Romex Through Ceiling Joists?

Generally, Romex and similar types of non-metallic sheathed cables are suitable to use inside buildings for branch circuits and feeders, as long as they are not installed in damp areas or wet areas exposed to sunlight.

This means that you might not be able to install Romex in bathroom or kitchen ceilings, but this cable type works well in other areas of your home. The same restrictions apply if you want to run Romex exposed, such as securing it to concrete, for example.

Before running Romex through ceiling joists – or using it elsewhere in your home – also check the local regulations. Some municipalities ban the use of non-metallic sheathed cables, so you should make sure your local building department allows it.

Generally, you can run Romex through ceiling joists in areas that are not exposed to moisture or that are naturally damp.

The best way to run the cable is along a pre-installed running board. If you can’t install a running board, a route parallel with the joists is preferable. In this way, you won’t have to cut holes through the joists.

As a last resort, cutting holes is possible, but don’t forget to install nail plates to protect the cable from accidental damage.