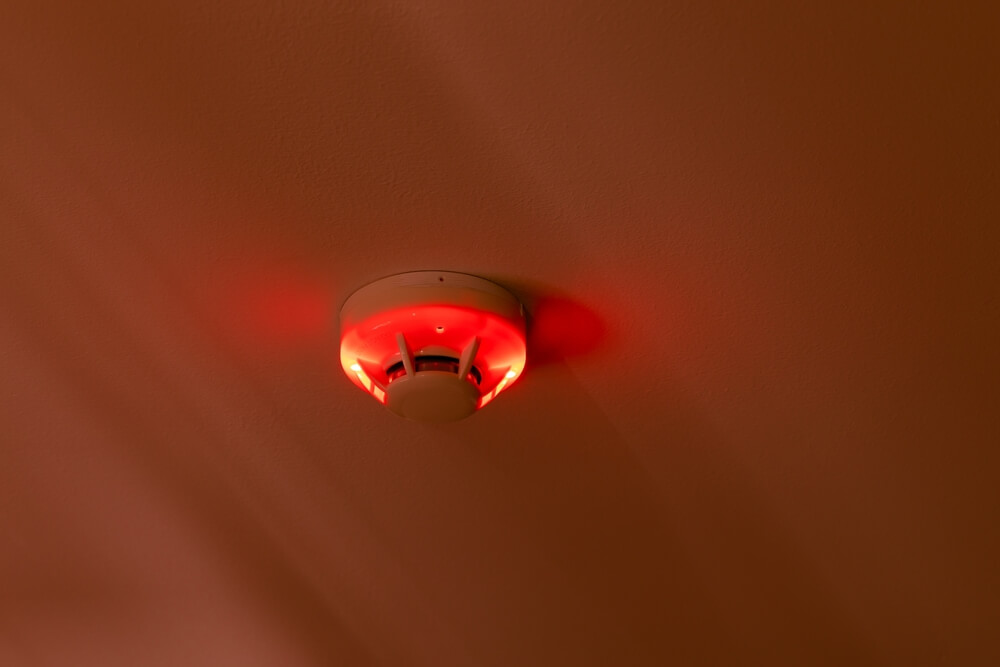 Smoke detectors are subtle devices. However, they can start blinking for, at first glance, no reason.

After closer inspection, though, you’ll find that there are five major reasons behind a blinking red light, and every single one makes sense when you think about it.

The most common reasons for blinking are low battery power, test mode and silent mode, device malfunction (usually happens to older detectors), and an actual fire. Some devices blink when they’re working just fine too.

Smoke detectors are affordable, and often life-saving pieces of equipment that have proven their worth time and again. Despite their incredible usefulness, they’re actually very rudimentary tools – they detect smoke and start beeping.

Since blinking can mean both good and bad news, here’s my breakdown of the most common reasons why your smoke detector’s red light is blinking.

If your smoke detector blinks once a second, that’s not normal operation, that’s something else entirely.

The good news is that normal operation is always the most likely reason for the blinking – it means that the batteries in the detector are fine and that it’s working properly.

Normal operation is usually indicated by a green light, although there are smoke detector models that use a red light for both normal operations and raising an alarm.

Some models don’t even blink – they have a constant light on when they’re working fine.

2. The Batteries Are Almost Dead

Dead batteries are another common reason for blinking. Most smoke detectors can work for 10 to 14 months before the batteries deplete completely.

Smoke detectors don’t need that much charge to power them (until they start beeping), so you won’t have to spend that much money on batteries.

However, once the batteries are dying, your smoke detector will start:

It’s possible for the beep to be longer, while some smoke detectors that normally don’t keep the light on start with long blinks too.

All of this should stop once you replace the batteries.

All smoke detectors have a ‘TEST’ button that you should use at least once a month to make sure your smoke detector is working properly. By pressing this, you’re basically pounding the alarm yourself, so the light will start blinking more intensely.

The alarm will either cut it out on its own or after you press the button again.

When it comes to silence mode, not all smoke detectors have this function. Its purpose is to silence the alarm when it’s beeping unnecessarily.

It’s possible that the detector wrongly detected a fire and now won’t shut up, or there maybe was a small fire that you put out and it won’t stop beeping.

If you turn the silence mode on, a lot of models have a blinking function that turns itself on. The lights start blinking with more frequency.

For example, model 3120B has a rapidly flashing red light in silence mode, while 9120B has a red light that flashes every 10 seconds.

Keep in mind that silence mode isn’t permanent in most models and the detector will turn it off after a while.

It will also turn itself back on (at least in most cases) if the smoke becomes denser (which suggests that the fire has intensified).

If the alarm went off and you can’t detect the cause of it – I wouldn’t recommend turning silence mode on. Although the fire may not be visible to you, it could still exist. You should only use silence mode when the smoke detector is malfunctioning or when you have personally found the cause of the alarm and you don’t need it anymore!

Just like any other device, your smoke detector can malfunction. It often happens that a broken or out-of-date smoke detector starts beeping in the middle of the night, causing panic in your home.

This is usually due to old age and it’s the most normal thing – you should replace your smoke detectors according to the manufacturer’s instructions.

Depending on the manufacturer, smoke detectors can work up to 8 years before needing replacement.

The US Fire Administration suggests that smoke alarms should be replaced no later than 10 years after the manufacturing date (which can usually be found on the back of the detector)!

See also  How To Secure Romex To Concrete: 5-Step Guide (Do This!)

Old detectors usually can’t be repaired or rejuvenated. It isn’t worth it even if they could, because smoke detectors aren’t expensive. It’s best to throw the old ones out and just get new ones.

Smoke alarms can cost anything from $6 to more than $40, depending on the manufacturer and quality.

This is the worst possible scenario, but also the least likely cause behind the blinking light. Most fire alarms will start aggressively beeping and blinking as soon as they detect a fire.

Rapid flashing or a flash every two seconds are the most common modes of flashing when there’s a fire.

In case this happens, there’s not much to think about. If it’s a non-fire-related incident (for example, burnt toast), then there’s nothing to worry about as it’s just a false alarm.

A small fire can also occur – maybe a candle on the living room table lit up a paper towel – you can put that out with very little water.

However, if there’s a serious fire that can’t be put out easily, grab your family members, get out of your home, and most importantly – call emergency services!

There really isn’t much to a smoke detector and these devices are very easy to take care of.

According to the Fire and Rescue Service, the most important things are regular tests, dusting, battery replacement, and detector replacements.

You should test your smoke detector once a month by pressing the TEST button.

The testing function doesn’t only test the internal sensor, but also the batteries and the circuitry – if there’s anything wrong, you’ll know it.

Dust particles increase the chances of false alarms because they cover up the internal sensor – the part of the detector that starts the alarm.

You should dust your smoke alarm twice a year. There’s no need to disassemble it, just vacuum it from the top.

You can also use compressed air to reach the insides.

Batteries should be replaced once a year.

However, as we discussed in the article, some smoke detectors can last longer and they’ll all warn you about depleting batteries, so keep an eye out for the blinking and beeping.

You should get rid of the old detectors and buy new ones once a decade or even sooner if the manufacturer specified so.

Every smoke detector model is different and these rules, while generally accurate, don’t apply to all models to the same degree.

See also  Does Romex Need To Be Stapled In Attic? (5 Step Guide)

How Do I Dispose Of Old Detectors?

You can dispose of old detectors with the rest of your household trash.

Although some detectors have a radiation warning symbol on them because they’re the ionizing type (as opposed to the photoelectric detectors), you can still just throw them in the trash.

How Useful Are Smoke Detectors? (Statistics)

As much as 34% of deaths in residential fires occurred in homes with smoke detectors that didn’t go off – most likely because of dead batteries or because they needed to be replaced.

Things You Shouldn’t Do With Your Smoke Detector

There are a few common mistakes that many people make with their smoke detectors.

Turning it off while cooking is by far the most common one. That’s negating the exact purpose of the smoke detector.

If it’s activated by cooking smoke and fumes, don’t turn it off. Instead, aerate the room with a fan or by opening windows.

The reasons this is so dangerous are:

This is especially dangerous if you have any construction work being done on your property. Fire can easily break out during construction.

Another mistake people make is painting the smoke detector over.

Understandably, a white smoke detector on a red wall can be an eyesore, but wet paint getting into the detector can mess with the smoke sensor inside.

This can lead to both false alarms and complete inactivity, even when there is an actual fire.

While smoke detectors are very simple devices, they too can face issues – dead batteries, and various malfunctions due to age. The lights can also blink because of the test mode or because that’s a normal function of the detector.

To ensure your smoke detector is working well, make sure to replace the batteries on time, clean it every once in a while, test it, and replace it when the time comes.