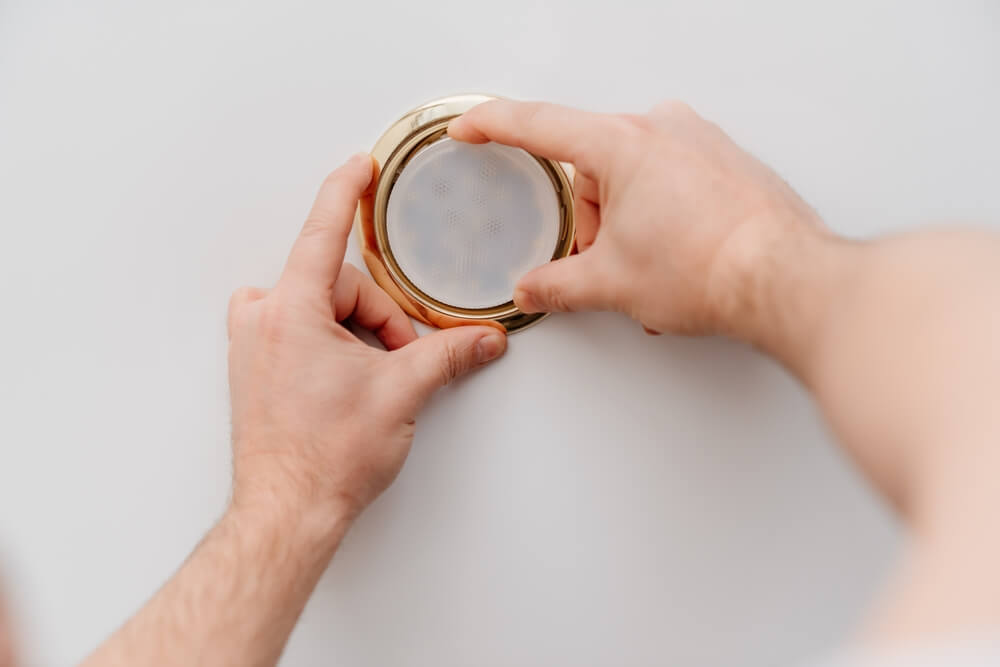 Wafer lights are often compared to can lights because they’re the most popular ceiling light options.

Although they’re similar on a very basic level (they both lighten the room up from the ceiling), there are differences in price, longevity, and the way they’re set up.

In order to make the best choice, let’s compare wafer lights vs can lights side by side and see which ones make the better fit.

Wafer lights are an all-in-one solution, which is why they’re often called canless lights, as there’s no ‘can’ to hold the bulb. A wafer light is one large unit with no individual parts that you can attach or detach.

This means that once one part of the unit breaks down, you have to replace the entire unit.

However, they’re usually made to be sturdy and they use Light Emitting Diodes (LEDs), which can have up to 50,000 working hours (depending on the manufacturer).

In comparison, incandescent lights usually have no more than 1000 hours of lifespan. If a light is kept on for 6 hours every day, LEDs can last up to 20 years, while incandescent and halogen lights last less than half a year!

Another difference between these two lighting systems is that the wafer light unit is connected directly to the electrical wiring and it has no electric box.

This makes the installation of wafer lights easy, as you don’t have to install the can (lightbulb holder) or the electric box.

However, wafer lights are simply not powerful lights. They can’t light up a large room – you would need to install many of them to achieve good lighting.

They’re great for smaller areas, though, while there are also smart wafer lights that change color and can be dimmed.

To explain the name – the ‘can’ refers to the housing – it’s metal and round, reminiscent of a can.

Just like wafer lights, there are thousands of can light designs, which include inconspicuous lighting, allowing users to include a light in the room without drawing attention to it.

Because of this, they’re a popular substitute for hanging ceilings.

If there’s one advantage can lights have over LED lights, it’s the decoration of the can itself.

Admittedly, there are LEDs that can change color and be controlled from the user’s phone, but can light housing can also be decorated with various edging and trims.

Can lights are very easy to replace once a light goes out, as all you have to do is replace the lightbulb itself, making them an easy fix, even for amateurs.

However, their initial installation is usually more difficult than wafer light installation.

Wafer Lights vs Can Lights: Side By Side Comparison

Wafer lights are easier to install. They have no electric box, and they don’t need a hole in the ceiling to hook up the light holder (the can).

Can lights have an electric box and they need a hole in the ceiling.

Can lights are usually more expensive, but not without good reason. They offer more powerful lighting, and once you install them, there’s no need to reinstall the unit – all you have to do once a light goes out is replace the bulb.

Wafer lights are not cheap either (honestly, the price difference between the two is usually negligible), but every time a light goes out, you have to replace the entire unit.

That means that you’ll be buying new wafer lights every five years or so.

Wafer lights use LEDs, which can work up to 50,000 hours before they start dimming (although that depends on the manufacturer and the exact light model).

See also  How To Secure Romex To Concrete: 5-Step Guide (Do This!)

With can lights, you can use any type of lightbulb you want to (which includes LED lights).

This is the greatest advantage of can lights – once the light goes out, all you have to do is replace the lightbulb.

However, when wafer lights go out, you have to replace the entire unit (which is both more expensive and more difficult than simply buying a new light bulb).

Wafer lights don’t only require less electricity to power the lights, but they also require less space in your home.

To install can lights, you need to drill a hole in your ceiling, which is terribly wasteful from an energetic efficiency perspective.

Heat will naturally leave the room through that hole, so you can expect your heating utilities to go up during the winter because of can lights.

However, when discussing the efficiency of can lights, it’s often said that can lights are less efficient because wafer lights use LEDs. This is not true – there are can lights that use LEDs as their source of light.

Can lights are less efficient because of the hole they make in the ceiling, but their efficiency has nothing to do with the ‘bulb’ they use, as they too can use LEDs (bulb is apostrophized because it’s technically wrong, but semantically right).

The biggest difference between can and wafer lights isn’t in the LEDs, it’s in the way they function and the way they’re installed.

Wafer lights and can lights usually don’t belong in the same area.

Can lights are great for any room that requires a lot of lighting for longer periods of time – such as the dining room or the kitchen. However, it’d be a waste of money to install a can light into the shed or the attic.

The attic is a space where wafer lights especially excel because of their spatial efficiency. If you install a can light into your attic, you’ll be drilling a hole right below the roof and heat will dissipate easily through it.

Other places that would do well with wafer lights are garages and basements – people usually don’t spend too much time there and they don’t need much brightness.

Using LED Bulbs in Can Lights

Many people wonder if LED bulbs can be used in can lights.

If the can isn’t air-tight, though, then you can use LEDs.

There are three things to take into account when choosing your lights; which room are they supposed to light, what’s your budget, and whether you can install them on your own.

If you need to light up a living room, then wafer lights aren’t even an option – the lighting they provide is weak in comparison to can lights.

You would have to install several lights to light up a living room properly. So, whenever you’re choosing the lighting, ask yourself, “How many wafer lights do I need?”

When it comes to the budget, remember that can lights are (slightly) more expensive than wafer lights initially, but they’re easy to maintain and replace once they go out.

Wafer lights, on the other hand, are more expensive down the road as you have to replace the entire unit every time.

Lastly, when it comes to your personal expertise, know that installing can lights isn’t easy for amateurs as it includes an electric box and that wafer lights are usually easier. However, if you’re hiring an electrician, this won’t matter.