Having spent years in the construction environment, we have come across a few questions from people, implying on us stating the processes and ways to run pipes underneath ground slabs, within the foundations or mostly within the soil. We’d get into it obviously, but first, may we specify that having an underground drainage pipe requires a lot of preliminary decisions? Of course; decisions that will be very paramount to the flexibility, cost and satisfactory conclusion of the whole operation.

Ignoring or bypassing this step might not only cause a rabid delay and strain to work process, it might allow for future complications in piping lines or overall system. The preliminary decisions or factors to consider when choosing an underground pipe in a short summary include;

Click the link “best plumbing pipes for domestic outdoor plumbing” if further information is required on the previously stated factors.

Having gone through all that, and having your preferred pipe ready. Let’s begin on the process.

1. Determine the Amount of Fitting Required to Complete Pipe Runnings

It’s an odd choice for a first step and we understand that sometimes…it goes with the preliminary planning when determining your preferred pipe type; in other words, most people prefer ordering for required fittings while ordering for pipes at once. Although in most cases, people tend to forget this part until moments when it’s an emergency or they are in need because to them, it doesn’t just seem as important, but I absolutely bet you, it is.

Determining the amount of fittings should come first and requires mostly the use of a plumbing plan. From this plan, each branch is to be highlighted and indicated with a unique color. Fittings such as bends, reducing bends, reducing tees, cross fittings and so on are counted and specified separately. It’s easy when done this way as it is now clear on what fittings to purchase and their numerical value. 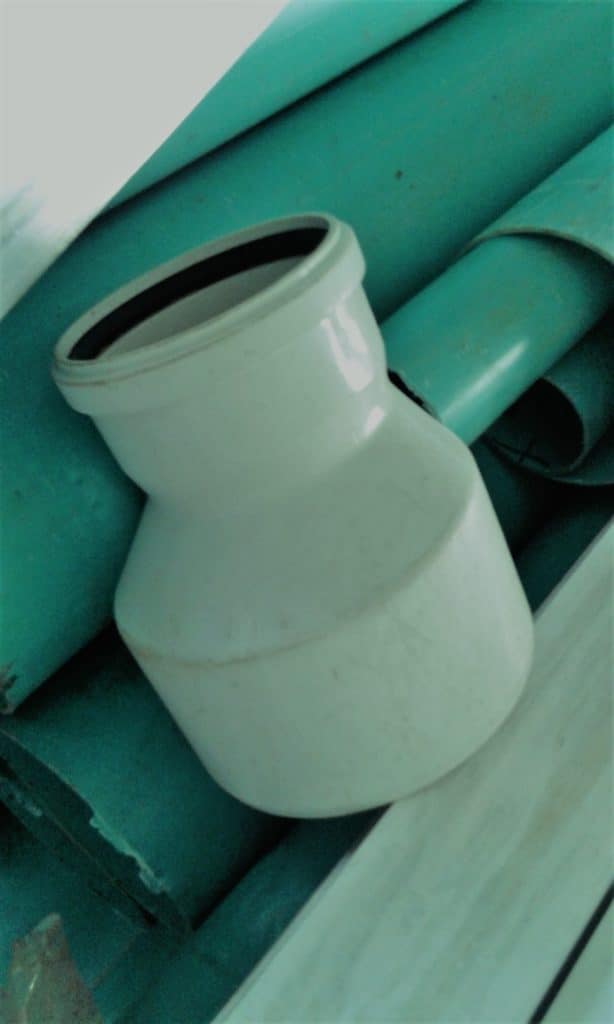 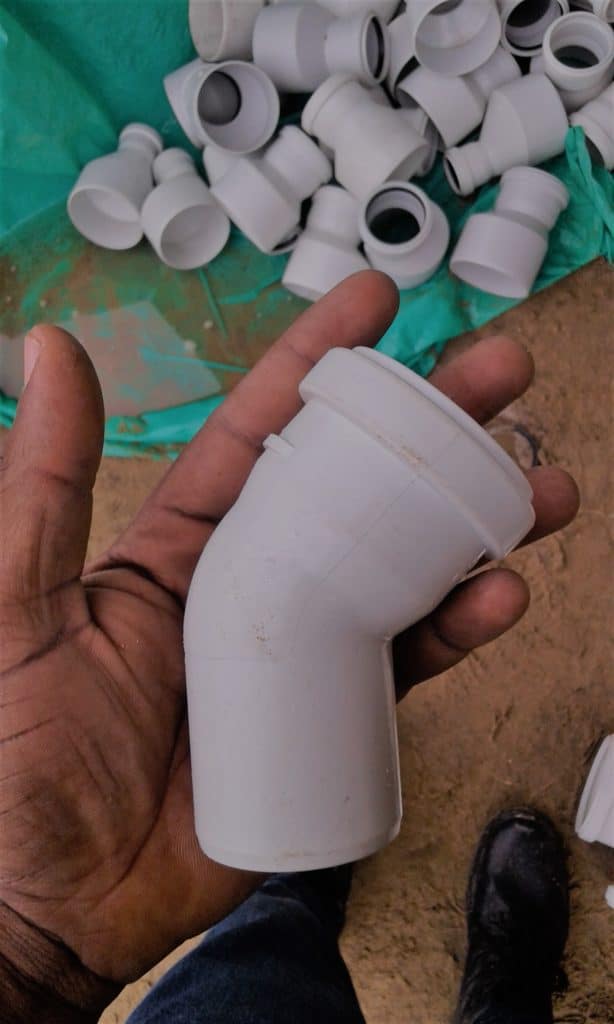 The process can also be applied when determining the lengths of pipes needed if that hasn’t been done before; a final tip regarding this is to make sure that values to be purchased are to be slightly higher than values calculated. This gives margins for additional practices and corrections when errors occur.

2. Navigate or Study the Work Area

From ideal practice, when you get to a site or place of operation, a slight navigation of the area is required; this is best done with a structural plan or plumbing design indicating where pipes are meant to pass, where chambers or fittings are meant to be fixed and where needed manholes, appliances and septic tanks are to be placed in the future.

It doesn’t seem like much, but this short exercise gives you a clear view of where the materials are to be placed, how they are to be placed and any possible obstruction or hindrance existing with work area. Clearances of obstruction will then follow providing a ready work area, with a proper idea in your mind on how pipes are meant to be passed and how work will be achieved.

After navigation of the work area has been achieved, certain key details are needed to ensure work is done without creating future issues when fixing appliances.

The final floor level is the height of the final surface of the concrete floor from the soil; in most cases this is required to ensure whatever is to be fixed doesn’t go beyond the height of the floor or goes too deep into the concrete floor. To be better understood, a typical example involves a floor drain; when running pipes for a floor drain, the point of where floor drain is to be situated should be highlighted on work field. The level at that point considering the slope of the pipe will be compared to the depth of the drain itself. If sufficient, then it can be used; if not sufficient, depth has to be adjusted to suit floor drain. This can be quite confusing for beginners, but there are simple tricks.

During the previous step, it was specified that points of appliances are to be marked to be precise as possible. This is because those points will be required to dig a trench in which pipes will pass from these points i.e. first point, it’s branched out points, to its final point at the required depth. The diagram below emphasizes; 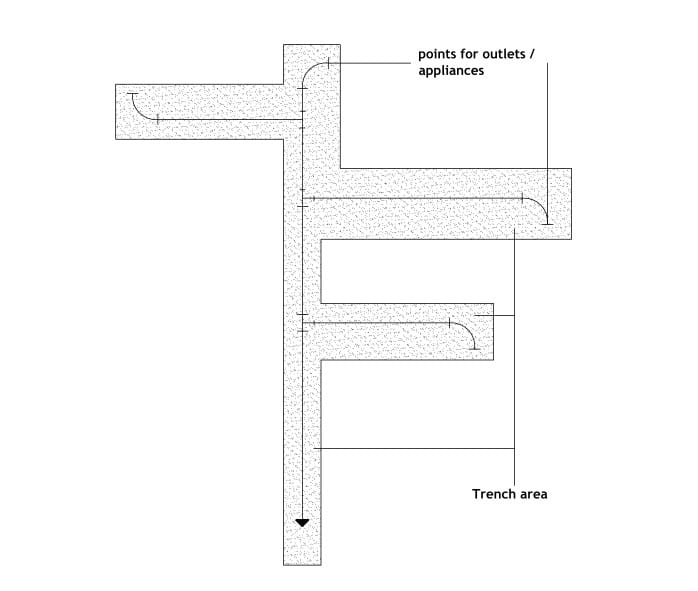 The trenches however are no joke as they are to be dug in such a way that allows for each access to main pipe from each branch and moves directly to its final discharge unit. The depth of the trench should be the calculated depth of the required slope at the final point of pipe.

See also  List Of All Common Plumbing Fittings [Choose This!]

It’s best to have more space to work with than to have less; by going deeper, you’re creating flexibility for yourself  and ease as any other thing to come after will be smoothly done and achieved.

Piping beds are basically the soil underneath placed pipes; they serve as platforms pipes can lie on as settlement to prevent deflections and pipe bellies. Piping beds can be formed from any type of soil depending on weight of pipe or its material type. (To know about what pipes to use for underground works, click HERE)

Ideally, the use of thin concrete beds known as “blinding” or stone bases are best for piping beds because normal soil particles require severe compaction and can shift quite easily during movements by seismic activity. To create piping beds according to slope is very important because the slope is what allows for smooth and swift movement of waste through pipes. Slope gradients vary according to context of waste, pipe types and other factors considered and they may range from 1 cm per meter to 1.5 cm per meter. 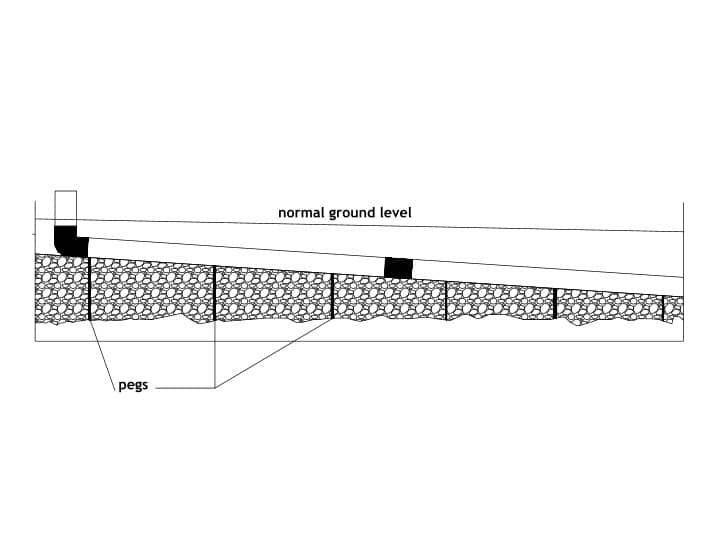 With use of leveling instruments, slope within the trenches can be achieved by placing each peg one to two meter intervals (or more) away from one another, the heights of each peg are then made to be 1 cm lower than the each preceding peg if 1 cm per meter is the slope gradient preferred; then stone base are used to fill trench according to height of each peg creating a sloppy bed surface. Mild compaction can be made to further stiffen bed. An example by diagram is shown above

After creation of piping beds, formally marked points would have been tampered with or removed either by negligence or by ignorance. However, points are to be re-marked or re-checked to confirm they are still correct.

The laying of pipes is the most direct of all steps at this point, it is also the most critical; points have been determined, trenches have been dug and slope has been created with a solid bed. Merely placing the pipe, following each marked point and making sure all is done according to the plumbing plan is what is needed to be achieved.

However this process may require skilled professionals if materials used are not PVC or CPVC pipes. Ordered pipes and fittings of choosing are then utilized; if error may occur, extras as stated earlier are available to use for adjustments.

With the laying of pipes done correctly, the testings of pipe against leakages should be undergone. For drainage pipes, apart from pressure tests because they can be quiet expensive, a traditional method can be utilized; a method that provides similar results as pressure tests do.

The conventional method implies that pipes are to be blocked at the singular main outlet for discharge; the total drainage network will then be filled with water to its brim and left for a total time period of 24 hours. Joints are to be checked and should be the focus when checking for leakages. If any form of leakage is found, it should be corrected to avoid any form of future hazard.

9. Place Bracing and Protection to the Pipes

When all is well and good; pipes are without leakages and flow is adequate enough with the right slope, bracing and protection of pipes are now to be considered. Whatever the intent may be, either you plan on having a slab on it or to cover with mere soil. Protections and bracings are advised to be provided.

Protecting your drainage pipes may come in the form of using concrete on them or the use of granular soils on the side and pure sand/soil on top.

You do not want to have granular soils on top of your pipes, as they may cause damage if imposed external forces press them against the pipe. Bracings required can be in the form of pegs nailed close to the sides of the pipes into the soil and pipes are tied to them with the use of binding wires; it’s a traditional method and quite effective.

10. Back-fill the Trenches and Level the Ground

With all work done; the final step of the whole process is to cover your pipes and level the work area; although it is not as direct as it seems. Back-filling the trenches require that soils with smooth particle are to be used as backfill either you have them protected beforehand or not.