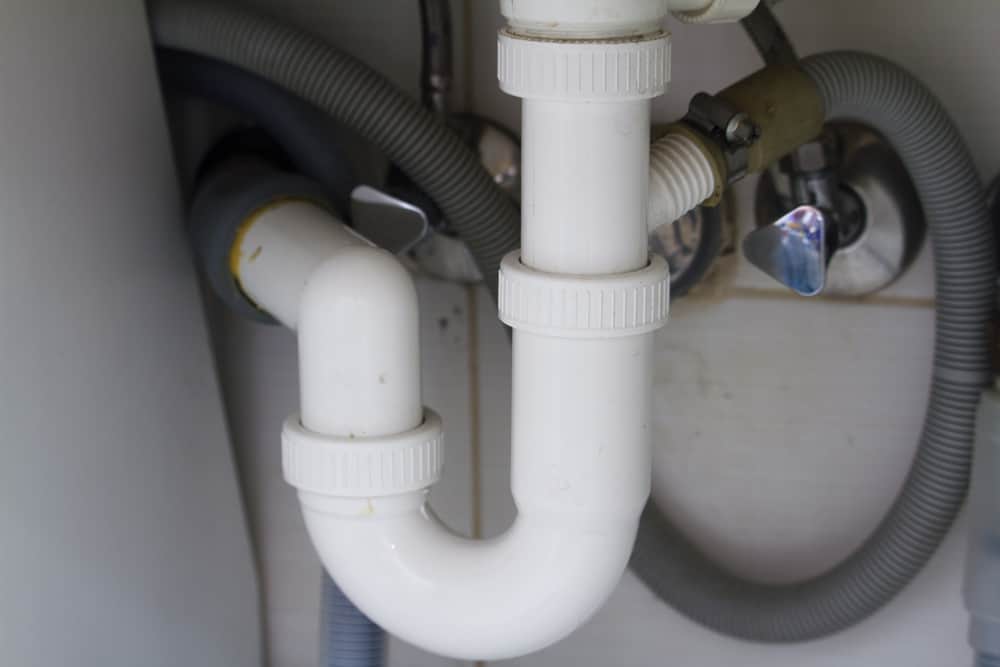 In a proper configuration, P-traps must be installed so that the horizontal arm extends from the bend to the wall drain in a slight downward slope.

Sometimes, the arm is installed in a straight line. However, in no acceptable configuration can the P-trap be lower than the drain pipe.

If you installed a new kitchen sink or bathroom vanity and the P-trap is now below the main drain line, you have to either raise the trap or lower the rough-in.

To do this, you have to:

Why Can’t A P-Trap Be Below The Drain Line?

Having a P-trap below the drain means installing the arm sloped toward the tailpiece. This configuration hinders the water flow due to gravity, increasing the risk of backflow.

You’ll also need a higher water pressure to push the debris down the line, so the drain is more likely to get clogged.

A P-trap can be higher than the wall drain pipe as long as the horizontal arm pitch is no steeper than 1/4-inch per linear foot.

A steeper slope would cause the water to flow too fast, potentially creating a siphoning effect that can suck the water seal out of the trap.

You should also avoid installing the P-trap higher than the wall drain if the two are very close to one another. In this case, you risk turning the P-trap into an S-trap, which is against the code.

The simplest way to fix a P-trap that is lower than the drain line is by raising it. The process is easy enough to complete by beginners.

To raise the P-trap and align it with the wall stub, you must shorten the sink tailpiece.

The tailpiece is the portion of pipe extending from the sink and connecting to the vertical section of the P-trap (the long side of the J).

Before you do this, however, you must figure out how much to cut.

Install the horizontal arm on your P-trap, then ask a helper to hold it so that it extends from the wall stub to the sink drain on a slight slope – the pitch should be around 1/4-inch per foot from the tailpiece toward the wall drain.

Mark the point where the P-trap inlet (the opening that connects to the tailpiece) meets the pipe going down from the sink drain. This is where you must cut the tailpiece.

Note: Don’t worry if you have to remove a large section from the tailpiece. While the Uniform Plumbing Code limits the tailpiece length to a maximum of 24 inches, there is no minimum length requirement.

If you have already installed your sink drain and P-trap, you’ll have to remove the tailpiece to cut it or replace it with a shorter section of pipe.

To do this, loosen the nut holding the P-trap in place by turning it counterclockwise.

Unscrew the tailpiece by turning it counterclockwise with a pair of pliers or an adjustable wrench and pull down on it to break it free.

3. Cut Or Replace The Tailpiece

You now have two options: you can either install a new, shorter tailpiece or cut the one you marked earlier.

If you want to install a new tailpiece, measure it to make sure it’s the right size.

Otherwise, use the hacksaw to cut off the unnecessary section of the pipe. Remove the burrs with sandpaper, then reinstall the sink drain, sealing the joint with the plumber’s putty.

At this stage, the tailpiece should be short enough to allow for a proper installation of the P-trap.

Test-fit the P-trap just to be sure it aligns properly with the wall drain. You may have to cut the horizontal arm if it’s too long, in the same way you did for the tailpiece.

Push the trap arm into the drain opening in the wall and fit the vertical end over the tailpiece. Fasten the nuts on each end to lock the P-trap in place.

Turn on the sink faucet and let the water run for a few minutes. Look at the joints to see if water is dripping. You should also pat the joints with a paper towel to check for leaks.

If any of the joints is wet, tighten the nut gently with a pair of pliers until the leak stops. However, be careful not to overtighten it, especially if made of PVC, because it could break.

Top tip: While the steps above explain how to raise a sink or bathroom vanity P-trap, they also apply to all other fixtures and appliances, such as a washing machine drain. Just make sure you’re using the right trap size.

The method above is the easiest way to align the P-trap correctly if the main drain pipe is higher than the sink drain. However, you can also use these alternatives.

This configuration allows the trap to fill with sufficient water to stop sewer gasses while still allowing for a proper flow.

Reversing a standard P-trap is a bad idea because the drain will become more likely to clog. A reversed trap might also hold more than four inches of water, which is against the code.

These traps are J-shaped – like all P-traps – but the longer side of the bend is still short enough to ensure a proper water seal when installed the other way around (short side to the tailpiece and long side attached to the horizontal arm).

A reversible P-trap can easily fix the predicament if the sink drain is only slightly lower than the waste pipe.

A plumbing rough-in refers to the water and drain lines that run through the walls, including the drain line you want to connect the P-trap to.

If you don’t want to alter the sink tailpiece, you can lower the wall drain by tearing off the wall and cutting the main drain pipe. This could be a solution if you’re planning a major remodeling of your kitchen or bathroom and don’t mind installing a new wall panel.

The purpose of plumbing traps is that of keeping sewer gasses from leaking into your home. HepvO valves do the same, trapping the fumes inside the sewage system without using water.

These valves are designed to use in RVs and tiny homes, but you could replace the P-trap with such a valve to avoid shortening the sink tailpiece or the main drain line.

While HepvO valves are approved for use in RVs and other residential applications, check your local building codes to see if you can use one in your area.

What is a drain P-trap?

A drain P-trap is a J-bent section of pipes that traps water to create an airtight seal. This seal prevents fumes from the sewage system – which are toxic and potentially lethal – from leaking into your house.

Does a P-trap have to be directly below the sink drain?

No. The P-trap can be connected to the sink tailpiece through another horizontal section of pipe, then connected to the wall drain. This configuration is common in situations when two sinks or a sink and dishwasher or washing machine share the same drain.